Do you feel you have really arrived in Germany? If yes or no, most importantly why and what is important to make you feel good?

Alisa S. likes to be at the Rhine in Cologne.

Alisa Subotina: Since I arrived in Germany, I really fell in love with this country. Now I’m living in Cologne, in a calm area and I am really satisfied with it. To be honest, when my parents began to decide if it is necessary to run away from the war to Germany, I was so frustrated (but the reason was only that it was difficult for me to leave my home, father, relatives…).

But immediately after our arrival I was so impressed about Germany: its buildings, its nation, its atmosphere, all of them are wonderful. After more than a month here I am sure that I love Germany and I feel great here. The most important factor to feel it was the right decision to go to Germany is the constant contact with people: with Germans, of course, and with my family. I always need to be informed about the safety of my relatives from Ukraine.

And the second fact to be happy here is the possibility to develop myself in my interests which I left in Ukraine. I used to study, play sport, plan my university career.

Alisa Gnedo: It was quite difficult to reach the understanding of being in Germany. My heart lives in Ukraine, where my family and friends remain. Moreover, I help in the volunteering centre, so that I am in the Ukrainian community all the time.

However, life here has some differences, but I am in the process of discovering them every single day. I notice that people in Germany mostly have different mindset, their structure of life is different to ours. It is really exciting to explore a new culture and new country in general, but it would be definitely better, if I visited Germany as a tourist, not as a refugee, escaping from the war.

When you think of your country, Ukraine, what is the first thing you feel? And if you think about it a little longer, what else?

Alisa G: Every time I think about Ukraine, I feel that it is my home. It is always the first thought. It is cozy, with humorous people, with soulful music, with tasty cuisine. Each following thought is the continuation of the first. Over the last two years I was noticing how fast Ukraine changes, how fast it develops. It makes me feel very inspired. I am from Kyiv and I have to say that it is my favourite city, my place of strength. Ukraine is different everywhere, but it is wonderful, although, in my opinion, it has just started developing.

Alisa S: This thought is really hard for me. I am so worried about the fate of Ukraine.

I can’t imagine that this situation is happening now, in the 21st century, it is unbelievable. (Alisa S.)

It is horrible to think about Ukrainians who haven’t left their home during the detonations, flying attacks and alarms. When somebody starts to ask me about the war, about my home, I’m really confused and afraid, because I immediately remember the events I watched during that week we lived in Ukraine after the beginning of the war. It’s difficult to restore this in my memory. After some more questions about the Ukraine I also think about my father who can’t be near me now, about my cat which I can’t hug now. The only one thing we can do now is just to say some lovely words on FaceTime.

Two Ukrainians: What they miss, what they love 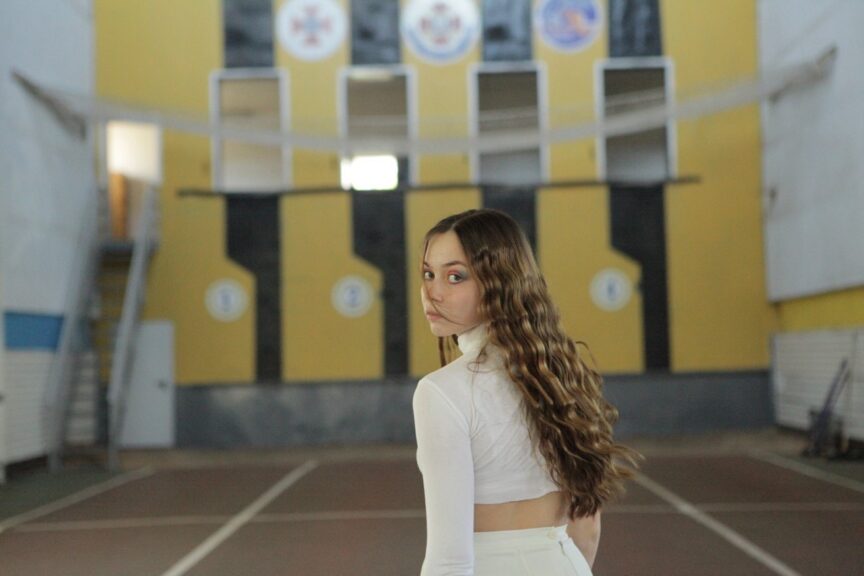 Of course you miss a lot, I think, but what is there in Cologne or Frankfurt that you really like compared to your home country? Has anything changed for the better?

Alisa S: It’s right that I have missed a lot because of war. I was in the 11th form in Ukraine, it was the last year of school for me, so the problem is that I’ve planned to attend university, which was my dream. But things that I found great in Cologne are friendly people, a cozy atmosphere. From the very beginning I was impressed with the way people treated us, absolutely strangers are so friendly, sweet and they really want to help you. I felt happy when they offered so much help to us, I am really thankful to all of them.

The most grateful I am to our host-family, who offered us to live with them, they do everything for us. (Alisa S.)

Our friend also has great “host-parents” and we have such warm relationships, I can’t imagine how much we will miss them! The other thing I love in Cologne are its buildings, shops, cafes and others like this. When I look at them, I feel myself the hero of some movie. These houses are so adorable, so cozy and so pleasant.

Alisa G: The first thing, which comes to mind and is really good, is public transport. It is really convenient, as there are much more ways to get to any destination, there are much less traffic jams on the roads and not many people in the public transport itself. Another thing is recycling. Recycling is very important nowadays and German attitude to it was very surprising for me and it deserves respect. And of course social protection, which is at a very high level.

You’re both at an age when you might be thinking about studying – could you imagine that in Germany? If yes (no), why? 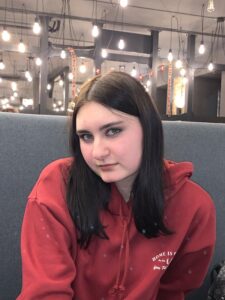 Alisa G: Studying in Ukraine and studying in Germany have completely different rules. Firstly, the school in Ukraine lasts for 11 years, while Germans have to study a little bit longer. There are different types of schools, but you can always study in university after passing the exam, while in Germany it is not always possible. Now, my plans are to study in Ukraine, but if I had a chance, it would be a great experience to study here, in Germany.

Alisa S: I’ve always dreamt about a university career abroad. I didn’t really think about Germany because I had decided to study at home, in Ukraine. But now I have a real possibility to live here and try to study at a German university. I had planned to study medicine and I’ve already heard that it’s so difficult to pass the exams here. To be honest, I’m a bit afraid of this information but I have at least 2 years to improve my language skills and necessary subjects. So, I believe that I might do it!

What do you find really stupid about the Germans?

Alisa S: When I arrived to Germany I already noticed the difference between my and your nation. I don’t think that it’s not stupid about Germans, but some of them (only some) are so so correct. It’s not a bad characteristic, but I don’t find it good when you follow all the rules in your life. 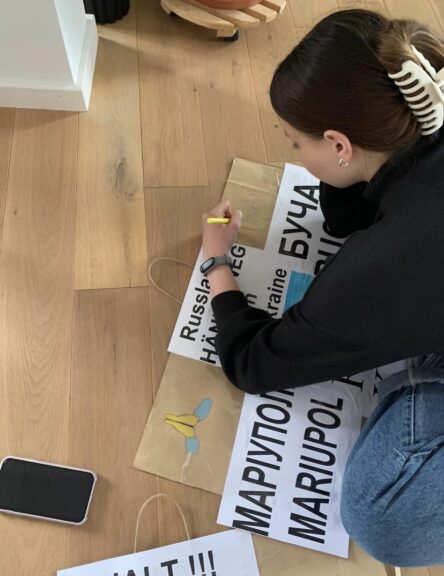 „I help in the volunteering centre, so that I am in the Ukrainian community all the time.“ (Alisa G.)

Alisa G: The only thing, which was really shocking for me is the amount of paper. Paper is everywhere. Everything is delivered by post.

In Ukraine there is the app, which is called «Дія» ( «The action» or «The government and I»), where all the documents are digital, including passport, driving license, vaccination certificate and so on. People also usually make the bank card online, read newspapers online and so on and so forth. So it was really unexpected for me to see so much paper here, in Germany.

And what do you find cool about them?

Alisa G: I noticed lots of romantic people. Flowers are everywhere and it is fantastic! The appearance and the atmosphere is important, people enjoy everything as much as possible. Germans appreciate their time, so that they can arrange everything in the most reasonable way. It helps them to enjoy their life and be on time in every sphere of their life.

Alisa S: I can’t highlight just one thing about Germans, but I consider that they are so strong and powerful. I have already said that I was impressed about their desire to help Ukrainians. Germans are friendly, and always ready to help even strangers.

Most touching: The kindness of people

Is there a little story that particularly touched you while you were here?

Alisa S: The story I found touching and also quite funny. I had some private German lessons. My teacher lives in Germany her whole life. During some lesson we had the topic of Ukrainian cities and she showed me one wooden box. I didn’t unterstand why, but then she said that she got this box from her grandmother during World War 2. The most interesting thing is that the wooden box was given to her grandma in the  Ukrainian city of Lviv. I started to cry a little after the memories of Ukraine.

Alisa G: The most touching thing here is the kindness of people, their readiness to help others. A great example is the family, where we live. They help us with everything and try to make our stay here as good as possible. I always hear some stories from the volunteering centre, how they are thankful to such people and it is very sensitive, as you feel that you are not alone in this world.

Thank you, Germany! Thank you, the world! (Alisa G.)

There’s a saying that goes: „And the sun always rises!“ I firmly believe it – do you too? Please explain why yes or no.

Alisa G: I definitely agree with you, but the most difficult thing is to wait until the sunrise. I am sure, that one day I will wake up and not only see, but also feel the sun. I am also sure, that it is not far away and the sun is preparing to rise.

Alisa S: Now I have only one hope: that the war stops in the near future. I don’t want anything except the peace and freedom for my country. I only want to see my father again, to meet my relatives, to hug my cat and realise that this hell has ended. So, it’s the only thing about my sunrise. I hope that the sun is going to rise above my country! 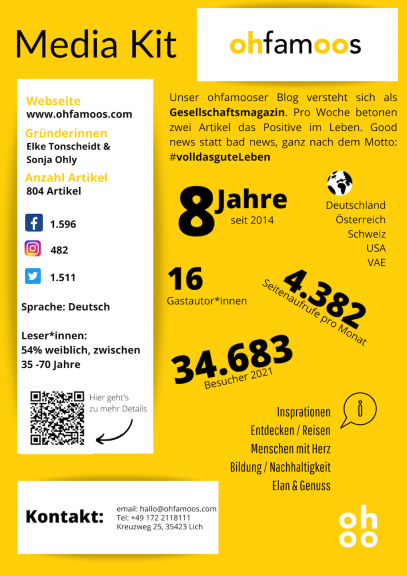